STATE TO PUT IN BEST EFFORTS TO STOP TRIFURCATION OF HPSEB

by News Team
in Shimla
0 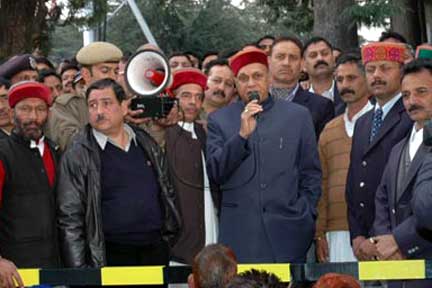 Prof. Dhumal said that the state government had always maintained cordial relations with the employees of the state and provided various financial benefits from time to time besides delivering them promotional benefits. He said that on returning to power the first and foremost decisions taken included enhancement in the daily wages of the workers from Rs. 75 to Rs. 100 in one go registering a record increase of over 33 percent to the daily wage workers. He said that the decision had benefitted lakhs of families who would be getting an enhancement of Rs. 750 per month, which had never happened in the history of the state so far. He said that while presenting the budget estimated for the coming financial year 5 percent had been announced as Interim Relief to the state employees although many a states had yet to make such announcement in the interest of the employees. He said that the interim relief would burden the state exchequer by Rs. 300 crore annually. He assured the employees that best efforts would be made to protect their interests.

Shri Dev Raj Sharma, President of the Mahasangh, welcomed the Chief Minister and apprised him of various demands which included stopping of the trifurcation of the HP State Electricity Board. He assured the Chief Minister that the entire technical employees wings would work in close coordination to achieve the objective of hydro electric exploitation available in the state.

Government committed for welfare of panchayat secretaries and Assistants