by News Team
in Delhi
0

Addressing the workers Shri Rajnath Singh told that the culture of India has been the culture of unity between Hindu and Muslims.  But the Congress Government which has failed on every front has started an issue of saffron terrorism in order to create difference between Hindus and Muslims and diverting the attention of the people from the failures of Congress Government. The people of the country are not going to tolerate such reprehensible conduct. He raised a slogan “Na Hindu Bura Hai, Na Musalman Bura Hai – Congress Sarkar ka Imaan Bura Hai”. He further told that when person occupying such responsible post as the Home Minister indulges in such behavior then acrimony arises against the Government in the society and a wrong message goes to the people. He told that the BJP will raise this issue from the streets to the Parliament. Until the Home Minister does not apologize to the people of the country BJP is not going to forgive. This issue will be raised in an aggressive manner in the next session of Parliament. The Government will have to answer for such conduct. 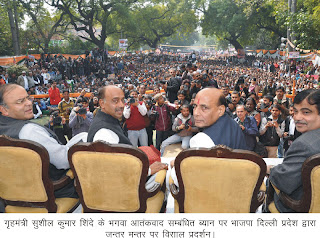 Describing about the history, importance and distinction of the saffron color Dr. Murli Manohar Joshi told that it is unfortunate that at present there is such Government functioning in the country which does not know about the history of saffron color.  The top color of the National Flag of India has saffron color. The people who conceived the National Flag knew about the oneness of saffron and India. Shri Arun Jaitley told that the history of Congress Party is witness of the fact that when this party and its Government are in crises, it tries to mislead the people of the country by raising wrong issues. The people of India are conscious. They are not going to accept such low grade tactics.

BJP Delhi Pradesh President Shri Vijay Goel told that he resolves that until the Home Minister does not apologize or he is dismissed by the Government, the movement of Delhi BJP will continue against Shinde and the Government. BJP will not remain silent until it dislodges the anti people Government. He told that he is very sorry about the pathetic condition of the country and Delhi. The people did not suffer so much after the independence as they suffer under the present Government. BJP will come to power in Delhi and the country. Every Indian will become happy. Many senior leaders also addressed the workers.